My first comment to this question was deleted by moderator George Stocker. The reasoning was that the comment is

a philosophical argument about what a newbie should or should not know.

It was not -- my comment merely made the observation that regular expressions or a naive split() would not do the job and OP should try writing a recursive descent parser instead. When I asked why my comment was - unjustly - deleted, he answered:

Be truly helpful, not "well I pointed him in the general direction." Helpful.

Which is rude and is not an explanation, nor is it warranted. I want my comment back -- it did no harm and added value.

I got involved because one of the comments left by the person you were arguing with was flagged as 'rude or offensive'. As it turns out, you were involved in that conversation; and your comment started the argument.

Your comment was deleted as part of a cleanup of the comments on that question.

Here's a screenshot of all the deleted comments, lest you think I'm making this up: 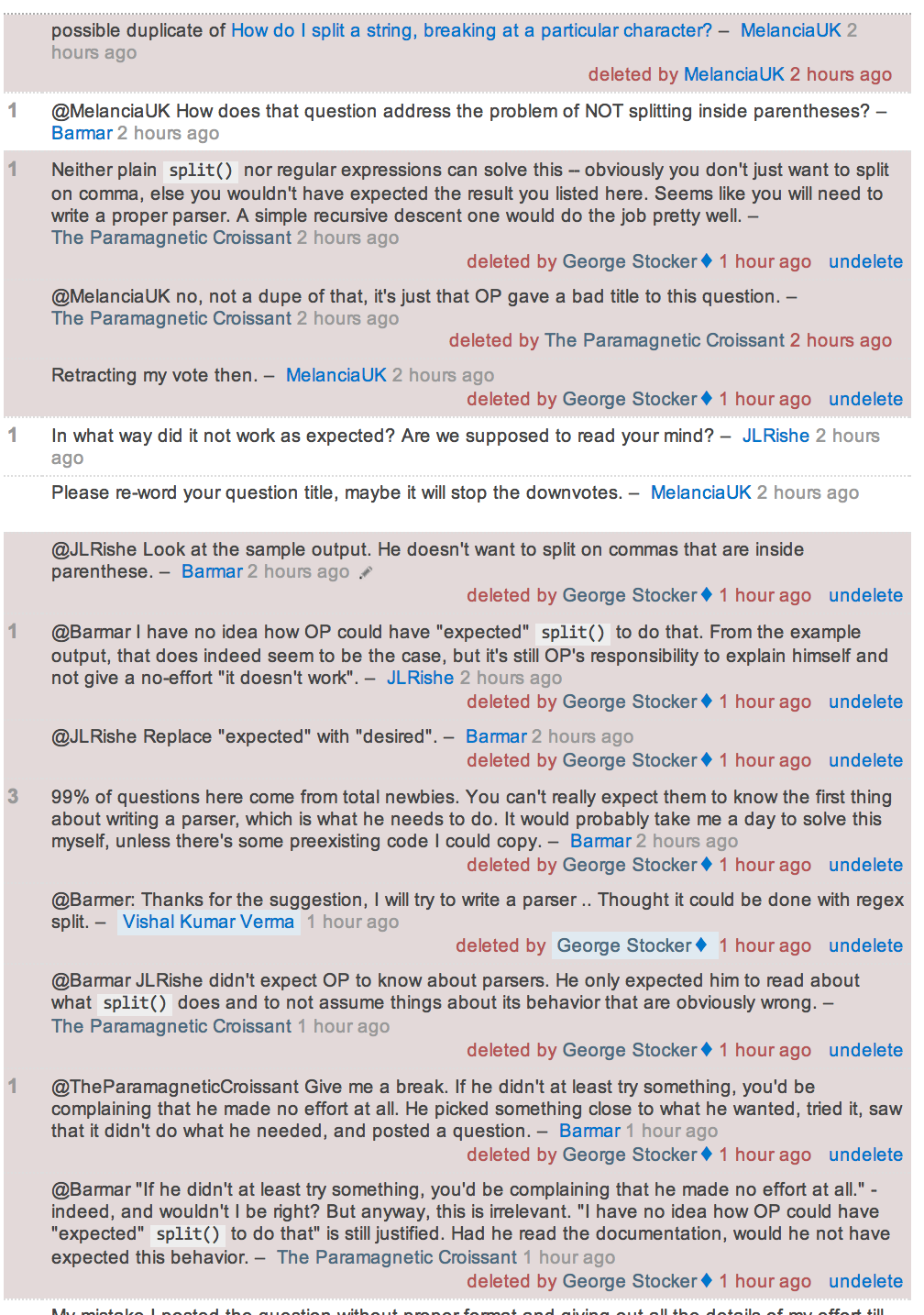 Is this your fault? No.

But, as you should know, comments are second class citizens and they have a specific purpose, as outlined in their placeholder text:

Use comments to ask for more information or suggest improvements. Avoid using comments to give answers

If you want to be helpful and give the OP useful advice, here is my suggestion:

An answer that explains what a recursive descent parser is (Briefly), how it helps in this particular situation, and at the very least helpful links that show him how to implement is a helpful answer.

If your comment is that awesome that out of tens of thousands of comments it should be the one to stick around, then it should be in an answer.

If someone flags a comment as 'rude or offensive', it's going to attract moderator attention to the entire comment thread, especially if the flagged comment is neither rude nor offensive.

44
Answer too commentarial, but too long for comment
43
Comment flag declined, all comments now deleted - what happened?
44
Relevant comments keep getting deleted at the OP's request
34
Why was my comment deleted?
120
When is a comment hostile or unfriendly? (Educating newer users how to flag comments)
9
Why would a question be deleted if it's on topic and not extremely low quality?