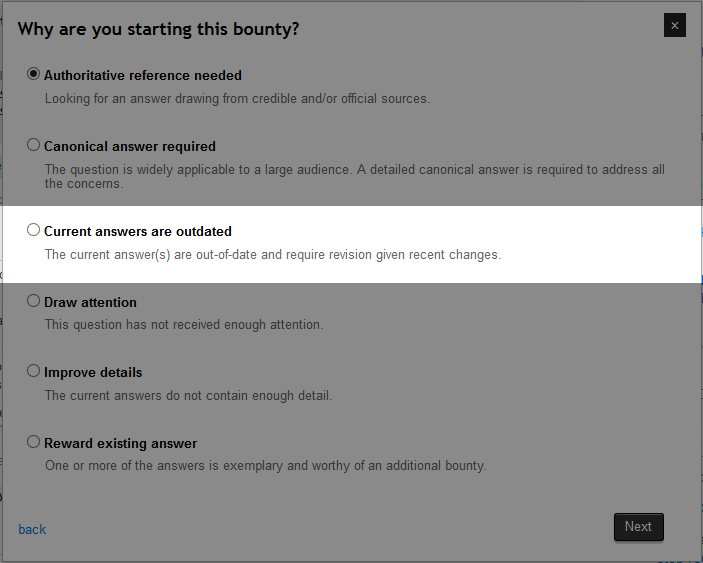 6
Can I set a bounty on a question I didn't ask?
2
How can I raise the profile of a contemporary answer when a decade-old answer have been upvoted hundreds of times?
-11
Put a points premium on unanswered questions?
2
Getting new answers on an old and popular question
125
Outdated Answers: results from use-case survey
110
What's the policy on down voting previously correct but now outdated answers?
90
How can recent answers catch up with popular old answers?
46
What is the Meta consensus on comments that self-promote answers to old questions?
44
Is it OK to start a bounty on a question you have answered to promote your answer?
39
I have a new answer for one (or more) old questions
See more linked questions

16
How should one maintain/support old answers?
20
Handle new answers to old questions
4
Is it OK to repost deleted answers as new answers when errors have been corrected?
16
Old answer which I no longer consider correct, what is the best approach?
75
Will people use Stack Overflow less often if the information found there isn't 100% accurate?
46
What is the Meta consensus on comments that self-promote answers to old questions?
19
Speaking of Outdated answers: What to do with a closed question where all the suggestions are outdated