I think I fixed a deleted question -- should it be reopened?

I had this question closed as "Unclear what you're asking" and then deleted. I edited the question and believe that it is now fixed.

Did I fix the question, and did I follow the proper procedure for fixing a deleted question? 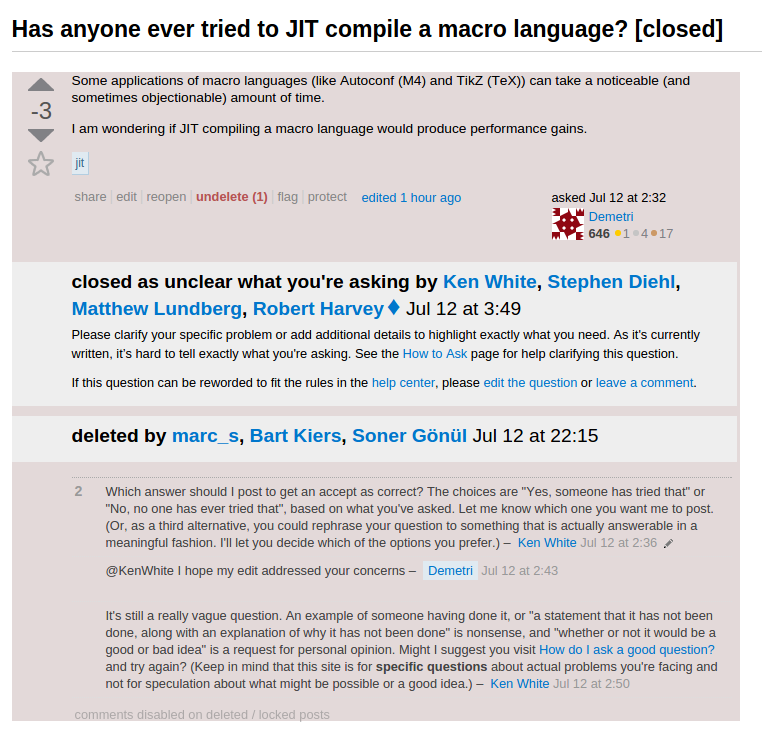 I don't see it as fixed. It still reads to be too broad, with too many answers and too much subjectivity.

Let's assume that it's not deleted. If one were to attempt to answer the question, the answer would fall into two distinct categories: yes, that's been attempted, or no, that's not been attempted. Of those two categories, they spider out into subjectivity and rhetoric (i.e. "It's been attempted, but the performance gains using XYZ JIT optimization were only X% better than if we had let it be," or "It's never been attempted because it's difficult to introduce a JIT to XYZ platform.")

It doesn't feel like it'd have any good, concrete answers.

You haven't actually changed the question.

Besides that, your question is in the title. It's not bad for the title to be a question, but the body should elaborate on exactly what you're looking for, and present an answerable question. Background information by itself does not a question make.

25
Vote to close unclear questions immediately after commenting?
18
Should I delete my old question which was closed and gets downvotes on random days
5
Edits to closed question approved, then question deleted
19
Question closed because unclear. Edits accepted, not reopened
70
"Community" bot deleted my reopened question