Can I edit an answer to add a prevention message to a security vulnerability?

I read this How to get the client IP address in PHP? answers, but in Tim Kennedy's answer the code has a security issue.

The user doesn't necessarily read all sentences of the message and comments when he needs to a quick fix, particularly if it's a big message.

I made this edit, and I "highlighted" the first idea on the security vulnerability.

I don't understand why my edit was rejected. Why does the code with a vulnerability not have a comment on the security issue?

I thought that Stack Exchange highlights the safety and right code.

Editing other people's answers is a complicated subject, and there are various stances about how to go about it, and whether it's even appropriate at all:

I've stated before that I generally prefer not to change the meaning of other people's answers (though I will make the occasional exception every now and then, e.g. there are upvoted comments to the author to make a useful change).

One of those exceptions is with security issues. For example, there are (highly upvoted) answers that describe disabling SSL verification while using Git, which can enable someone to impersonate a trusted endpoint (e.g. GitHub, or any other remote Git host).

I've edited warnings about the security implications into the answers, and made it clear that the warnings were not part of the original author's answer by explicitly stating that they were left by an editor:

Editor's note: disabling SSL verification has security implications. Without verification of the authenticity of SSL/HTTPS connections, a malicious attacker can impersonate a trusted endpoint (such as GitHub or some other remote Git host), and you'll be vulnerable to a Man-in-the-Middle Attack. Be sure you fully understand the security issues before using this as a solution.

So my point is, if you're going to make a drastic change to someone else's answer to highlight security issues, make it clear that you've done so by stating that it was an editor that highlighted the issues, not the original author.

Of course, making a drastic change like this is easier when you have full-edit privileges. If your edits have to go through peer review, I can see such edit attempts as being shot down by reviewers who generally hate drastic edits slipping through because of robo reviewers.

Sometimes, yes, you can leave a big bold comment, especially on answers that don't already have other comments (or have very few):

However, sometimes people don't make their warnings in the comments bold, so they don't stand out, even if they end up being highly upvoted: 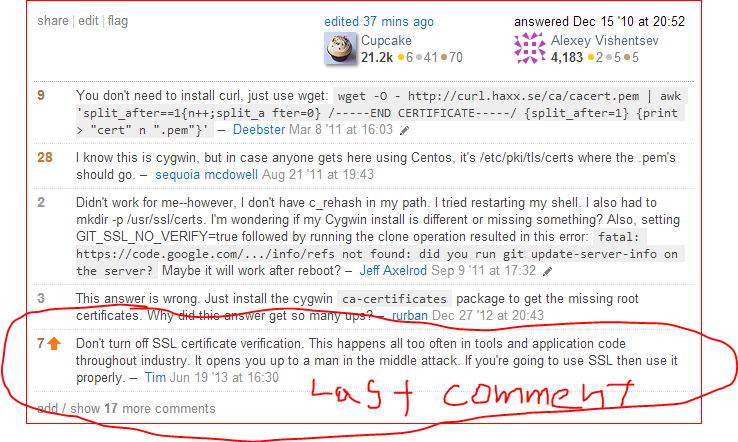 Further more, sometimes no one notices security issues until much later, when an answer has already accumulated a lot of comments, so any warning comment you leave just ends up being hidden by the other previous (upvoted) comments...so no one generally sees the warning.

Some reviewers tend to repeat the decision of the first reviewer, rushing together to the "community conclusion" like a herd of bisons. Maybe we should hide the votes of other reviewers.

From the other side, maybe you have over-tried by also adding a comment into the source code and putting the text in bold. However the information itself is definitely useful and correct. If such edit has been rejected, add a comment instead.

99
Good question, old version-dependent answer
76
How to Warn of Serious Issues in Code Unrelated to Question?
77
Why was "Stack Overflow" chosen as a name for this site?
34
Should I accept an edit that adds information to an answer?
6
Flag posts with security issues
28
What can users do about outdated locked questions?
24
Is a comment warning enough when dealing with potential data loss?
5
Is it OK to edit answers to show that they are obsolete, out-of-date, and deprecated?
7
How do I deal with answers that are good for experienced users but potentially dangerous for newbies?
7
How can I edit several messages because there are security concerns?
See more linked questions

343
Problematic PHP Cryptography Advice in Popular Questions
36
What can I do to avoid edit collisions that leave a post in a bad state?