Should questions about programming viruses and malware be allowed?

I thought we had clearly settled that:

Is that still the standard? This question appears to be on the wrong side of that line. The knowledge itself is trivial and multiuse, but the "code to be debugged" is an obvious attempt to spread a virus and silently infect machines running older versions of Windows. 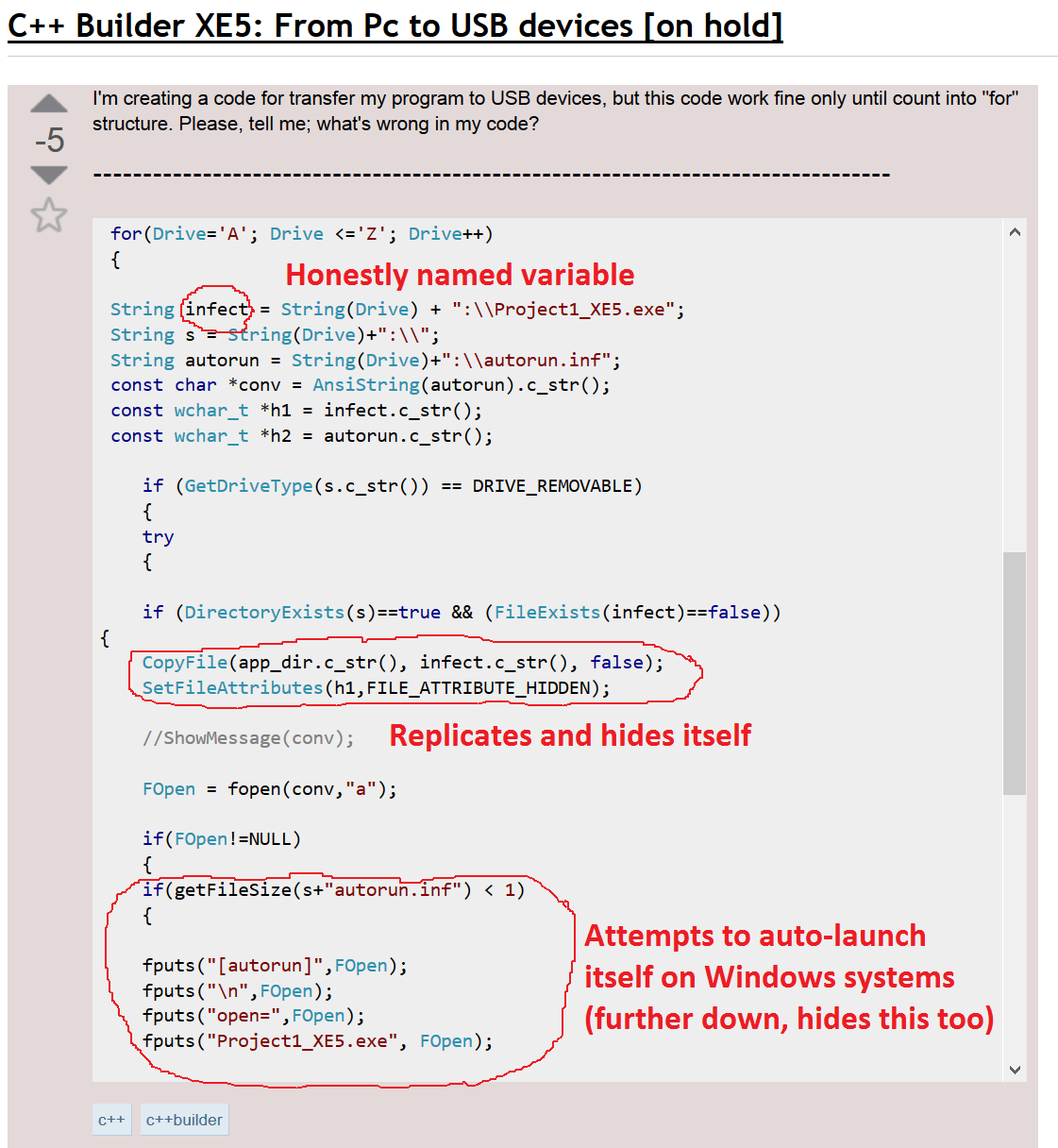 It would be interesting to hear what the wise folks at IT Security have to say about this, since I expect they have established their own set of rules on what questions it is ethical to ask. Indeed, some discussion of such matters can be found on their Meta at Clarify our stance on black hat questions.

My feeling is: let the question stand as long as the OP is neither:

Allowing public discussions about how to create malware doesn't just help blackhat malware authors, it also helps penetration testers and people trying to defend against malware. Defending against an attack often requires a decent understanding of how the attack works, which is best obtained by performing the attack yourself in a controlled environment. If you're a web developer, imagine trying to ensure your applications were secure against, say, SQL injection or XSS without ever having an injection vulnerability demonstrated to you, or ever creating one yourself, because merely creating such things or helping somebody to do so was considered unethical. The idea is absurd.

Judging from the screenshot, the entire issue is moot for this question since - moral issues aside - it deserved to be purged for crapness alone.

I think the way viruses work an spread themselves is very interesting, and it's great learning material. Modern computers should be quite well harnessed against simple viruses like this, and they are very unlikely to become a real global threat.

I've written a 'virus' or two in my younger days. I remember that I once got an (paper) book from the library, that described how viruses work and how to write one yourself. So I followed the steps and wrote an actual, self spreading MS-DOS virus in Batch.

It did hardly do any harm, except mess up my own computer a little, but still I think it was a great learning project.

Currently, I don't have any intention to take over the world with my virus programming skills, but I still think that project was cool. As a kid it's nice to do things that aren't allowed, including climbing over fences, gathering jars full of spiders, abusing fireworks, and -if you're a nerd- mixing up kitchen chemicals or writing a virus. And I think at the level we're talking about, they are all equally innocent. I mean, copying a file and making it hidden? Really? I think it's cute.

I think you will find that any (hypothetical) rule that "we allow Questions about writing malware" would not achieve consensus. There would be enough people who feel strongly that such Questions should not be allowed that they'd be downvoted and closed anyway. And probably deleted too.

Same for people asking for help cracking license protection schemes, work around web-crawler blocks, sending spam and so on.

We have clearly settled that we do allow questions about the creation of malware. Why are you bringing this up again? Why do you want to change the policy?

From the top-voted answer on Should virus or illegal-activity related questions/code be allowed? (copying the entirety of Ondra Žižka's answer because it's a good one):

Why not, virus coding is knowledge like anything else. It can be used for antiviruses, system core programming etc.

Studying viruses is not bad per se. Releasing them is. Studying security vulnerabilities makes good people fix them, bad people exploit them.

Censoring virus-related topics will not stop virus authors. Those are good enough to go on without stackoverflow.com. It will only decrease knowledge about the viruses, and potentially raising developers for companies like AVG, Avast, etc.

Of course, not those openly illicit. But let's not be naive - a real virus creator would not go here and ask "Hey I want to make a virus." Those who would are most likely not capable of creating it anyway.

From the top-voted answer on Dealing with questions of nefarious intent:

Basically, what I'm saying is that you have to treat each post on its own merits.

From the top-voted answer on Should "virus source" questions be deleted outright?:

Personally i have no issue with the OP asking specific questions about the code, as it is programming related after all. There is nothing wrong with studying virii, it is the use of the code that is criminal.

Speaking as a professional white-hat developer, I want to see black hat questions. They tell me what I'm supposed to defend again. When designing a defense, a lot of the difficulty is imagining how it could be breached. I want to know what my adversaries are up to so, so it would be highly counterproductive to prevent them from speaking in my presence.

This is in addition to the futility of recognizing nefarious content as such. One man's malicious spyware is another man's IT policy enforcement tool. The only clearly malicious content is script kiddies, and we have other reasons to close “how i rite virus???? plzsendtehcodez!!!!”.

I feel questions about writing malware are on topic, but I also note that no one is required to answer them and users may downvote for any reason. Thus asking such questions is unlikely to be productive for the asker, not to mention such questions are on the public record should any knowledge gained be used in anger.

Questions about analyzing malware are on topic, either here or perhaps at Reverse Engineering (though I'm not familiar with that site's policies), and malicious web app modifications ("my WordPress got hacked, what's this script trying to do?") might be on topic on one of the web-related sites.

Aside: one of the other answers mentions people looking to work around web crawler blocks. I've answered a couple of questions in the [jsoup] tag about scraping sites that try to stop non-browser agents or that have a terms of service forbidding automated access. I usually don't have enough context to determine if the asker is good or evil, but the information is being served to the public, and I know a motivated web server can make things arbitrarily difficult for a scraper, so even if I should enable an evildoer the damage is limited. As this is a [discussion] I'd like to hear (in the comments, or in another question if there's enough interest) what the community thinks.

In my humble opinion it would be a very bad idea to banish this kind of uncomfortable questions.
By doing this, you're actually censoring someone's right to knowledge.

There's a very big difference in having the knowledge to do harm and doing it in the first place.

Every hacker I know, and I'm speaking of true hackers not the TV shows hackers (See 1), obviously have some extensive knowledge on malware creation, hacking, cracking, disassembling and so on...

By denying this kind of questions, you're going to deny the very same right to understand and learn these concepts. Which is bad.
Really bad. 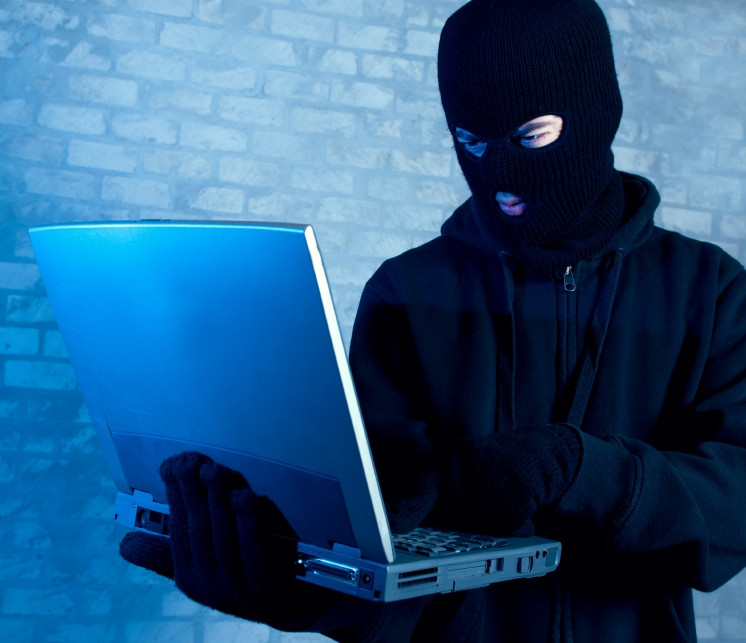 Why not! the faq section clearly describes that if the question is

then it is allowed and on Topic.

StackOverflow is all about about programming Q&A. We just simply can't allow such questions to be asked just because they are unethical.

I think that we should provide the source of knowledge and leave it up to the users that how they use that knowledge.

Such questions should be allowed. Its enhancing the way you do coding . And what do you think of answerers to such questions?

See, its not about if question is good or bad .Its about Good answer no matter what kind of Question is asked.After all ITS ALL ABOUT CODING ,AND CODING IS NOT LIKE GOOD OR BAD THING.

It depends if this site is meant as white hat or hat-less, as a white hat site as i believe this to be no we should not allow questions which are clearly designed for writing or fixing malware but aside from that we should not disallow a question just because it could be reworked into malware ... or at least this is my opinion

Not the answer you're looking for? Browse other questions tagged discussion scope ethics .

7
Are hacking questions allowed?
8
Moderator declined my flag of an illegal question?
4
Pattern of questions indicates a user is writing malware
2
Unsure if I should post an answer
2
What to do with questions asking to break companies'/schools' security rules?
2
What to do about questions that sound like malware?
1
What to do with this dangerous code?
237
Blindly Copy-Pasting Code is BAD: A Gentle Reminder!
62
How to handle "What does this (malicious) obfuscated code do?" questions?
50
What should be done about users only asking about how to spam?
See more linked questions