Can I block upvotes on my own answer?

A few days ago I answered a question about an easy issue about C/C++.
In general, several answers were upvoted by a lot of people.
I think my answer is right and deserves 1 or 2 upvotes, but no more.
However I have 21 upvotes up to know.

I don't want to delete my answer, because I think it is a good one.
But I don't want to have a lot of upvotes by what I consider an almost silly answer.

I have worked a lot in answering other very difficult questions about C, and I have obtained just a few upvotes for them.
I think that my reputation was growing according to that effort in a fair pace.

But, on the other hand, now I gained 210 reputation points very easily by answering a trivial thing about if-else statements in C/C++.

This behaviour in the website pervert the right way in that reputation works.
Any lucky guy could obtain a bunch of reputation without great effort, with the final result that silly guys become moderators with high privileges.

If a question is easy to answer, the moderators would have to be able to indicate that this is the case, and automatically an anti-enthusiastic mechanism be triggered, in such a manner that a maximum of upvotes be accepted, or well, giving a less value to the upvotes for that particular question.

You can make your answer a Community Wiki post.

Community Wiki posts do not earn you any reputation, and are easier to edit (lower rep requirement) by other users.

There is a checkbox below the post editor; check it and it'll be a CW post on saving: 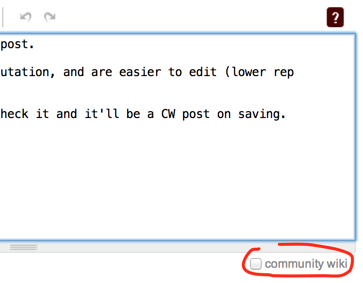 Not the answer you're looking for? Browse other questions tagged feature-request reputation upvotes .

28
Fewer upvotes for answers that are accepted soon
2
No notifications received for an undeleted answer and reputations got?
11
"Serial voting reversed" destroyed my rep