I just got an edit review that displayed only a comment (with an email address) - no diff on the rendered output, and it doesn't even have a link to show the markdown diff (maybe because there was no change). 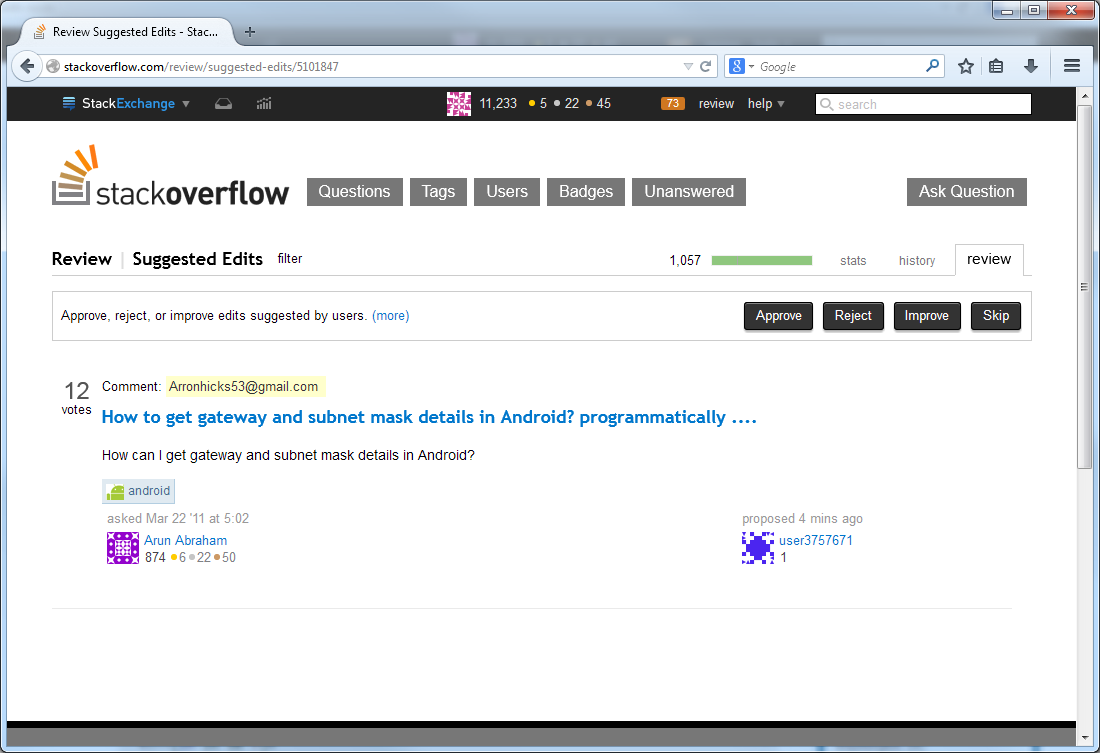 How did this happen? Does the system allow proposed edits that don't actually change the content? If the review interface can recognize that there was no change to the markdown, couldn't the edit interface notice the same thing and not allow it to be suggested in the first place?

There was no grace period issue here. The person who suggested the edit made no change; the edit form was submitted as presented (whether accidentally or due to misunderstanding, I don't know).

As you can see, the title of the latest revision of that question ends in "....", but the question title does not. Such unnecessary punctuation is automatically removed on submission, but the edit that appended those dots was made in March of 2011, and the auto-removal was only added in July of that year. Apparently we then made that change retroactively to the rendered posts, but not to the revision data. I can see arguments for and against that, but neither way creates any major problems. And in this case, it actually uncovered a bug, and that's definitely a plus :)

The edit suggestion went through because the "has anything changed?" check is made against the post's current content, but both the editor content and the suggested edit diff are based on the post's current revision. If it weren't for the above-mentioned retroactive title change, the two would have been identical.

The actual bug here was that the punctuation cleanup was not applied to suggested edits. The "dot dot dot dot" should have been removed when that edit submission was made, but this wasn't the case. This is fixed in the next build.

I'll go out on a limb and suggest one way it might possibly have happened:

Someone edited tags, and while the edit was in the queue, a synonym-request got approved which undoes the change:

gave me the idea, after looking at the linked revision (description):

Here's what happened with that suggested edit:

I didn't fully test to see if trailing periods and non-printing characters are needed to do this. It seems like they might be, maybe. I didn't want to create too many suggested edits to test it.

Not the answer you're looking for? Browse other questions tagged bug status-completed review suggested-edits .