Allow a close vote to replace an active close flag

I was looking through my flags recently, I noticed a couple of my very old duplicate flags are (at the time of writing) still "active":

I now have the require reputation to vote to close, so I figured I should get the ball rolling by actually casting a close vote. However, when I click close, I'm told I've already flagged the post and am not presented with the option to actually cast a close vote: 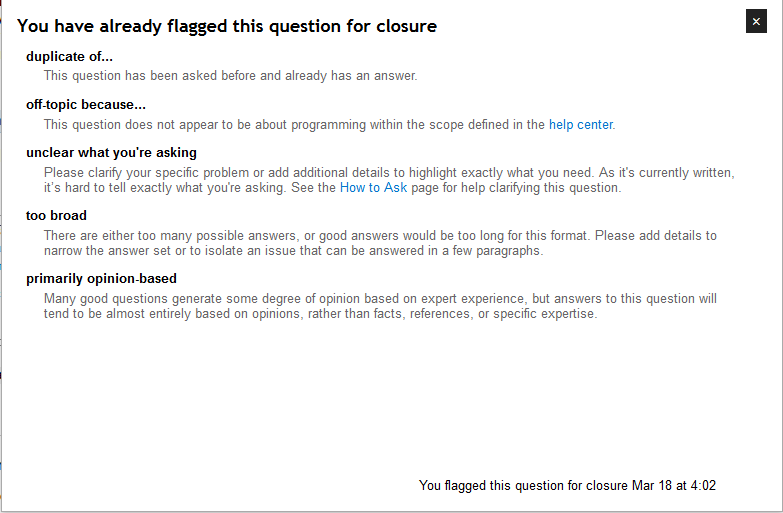 If relevant, the two questions are Insert python variables into rows of mysql table and installing psycopg2 on Windows xp using pip and virtualenv.

In my opinion, this doesn't make any sense. My understanding is that all a flag does is place it in the close queue for other normal users to review. Since the flag is active, I believe this means no one has ever actually voted either way on whether to close or not. Essentially, all I did in the past was wave my hands in the air and tell people who can take the appropriate action, "Hey, come look at this!" And so far as I can tell, no one has yet paid any attention. Now that I have the ability to vote to close myself, I would like to cast an actual close vote that can count towards closing the question.

My feature request actually depends on whether one of my assumptions is true: I am assuming that since the flag is still Active, no one has ever voted for or against closing the question.

If my assumption is wrong, then perhaps the correct way to resolve this is that my flag should no longer be in the Active state. It should be marked as either Helpful or Unhelpful. Rather than sitting in my flag list as Active indefinitely.

If my assumption is correct, then I make the following proposal:

Flags and close votes now age away. As a result, you can cast a close vote once the flag ages away. You can also recast your close vote. This solves the problem of not being able to cast a full close vote once you've flagged it (before having enough rep to close it).

45
What happens to all your pending flags when you reach 3000 reputation?

1
Inconsistent flagging and close vote behaviour
57
Flag question vs. close vote vs. both?
21
Should users be permitted to both answer and close a question?
317
Educating people to flag spam and not vote to close
20
Can we trial a line in the close vote reasons other with a link to flag as spam?
1
Is a close vote causing the question to enter the close review queue?