Appropriate Response for 'Do My Job' Questions

I came across a question recently (that I now can't find, so maybe it was moderated to hell) that basically displayed a few error messages (in C# perhaps), along with a block of code and the accompanying text was something along the line of "Need this for job, its not working, please give me teh codez to make this work". I may be paraphrasing, but that was the general gist of the question.

OP displayed a tenuous grasp of the language, there wasn't anything hideously wrong about his code that I could see from a cursory inspection and they posted a (reasonably) clear problem description as well as a description of what they wanted to achieve.

What grated against my professional sensibilities was that here was someone working in a similar position as mine, has resorted to SO to try and do his job for him. Now fair play to him, perhaps the question was poorly worded, but the impression I got was that he had no interest in actually figuring out why the problem was occurring, he just wanted a fix.

I did downvote the question, but they had roughly 300 rep so they weren't a 'brand new' user. My question is this: Is downvote really all we can do in this case? This person is literally saying "do my job for free, kthx". Would a more appropriate response be to comment and tell this person, that asking SO to do their job is inappropriate.

I know that similar questions have been posted about student assignment 'gimme teh codez' questions, but I feel that this kind of thing is a little more serious as this is a supposed professional (like we all are supposed to be) who is doing pretty much exactly the same thing except they are being paid to do so.

Personally I have no interest in directly fixing a person's code, rather I try to answer the questions with simple code and an explanation of what they were doing wrong, but in this case its clear that the OP wasn't interested in anything other than getting his code fixed.

Before you pounce on my profile and point out that my own question history has not been stellar, yes, I admit that I was guilty of similar behaviour, but I don't want to delete them because they've been answered.

A down vote is the absolutely correct thing to do. When you have 3000+ rep you will also have the cast close votes privilege, so you can cast one of those too. There are a couple of close reasons that cover this: 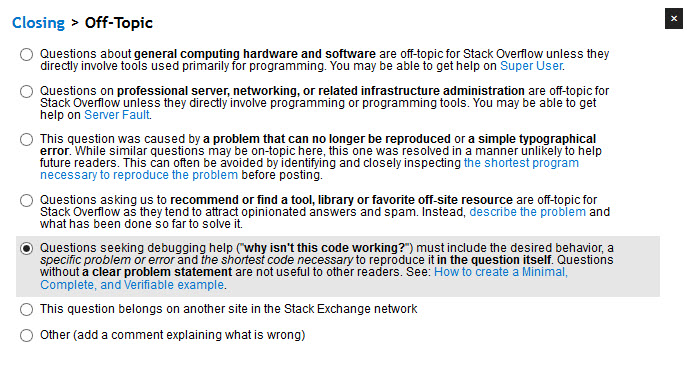 Leaving a comment is also a good option, although you shouldn't expect anything to be done in response to it. Many people simply don't care to put any effort in, normally these questions will pretty quickly get voted into oblivion.

23
Can "do my work" type questions be closed as "why isn't this code working"?
23
How flag questions like "please do my job for me"?
11
What link should I give when people ask to write their software for them?
6
How should I review a clear question with no attempt?
26
How to flag/close as "not a code-writing service"
4
Proper Triage close reason for "write this for me"?
-3
Additional close vote reason?
4
Is this question off-topic? What should it be flagged as?
557
Should we add a "Do my work for me" close reason?
239
Do we need a close reason for zero-effort questions?
See more linked questions

8
Does it violate Stack Overflow rules to answer a narrow and specific “give me teh codez” question?
18
Is there an exception to the "don't edit the code logic or functionality" mantra when the code in question is something the OP claims is correct?
2
Aren't questions asking for clarification on a homework question on-topic?
5
Are requests for concept suggestions good questions?
57
How do you stop a user from posting bad questions?
46
To curate or to not curate - questions about code-only answers
84
What is the best Triage response for give me teh codez questions?
35
What's the best response to questions with multiple dupe-hammerable issues?
3
Handling near similar questions with minor requirement changes