Update this is no longer reproducible, thanks to everyone who has helped.

All browsers I have tried display SO code blocks using a monospace font, except the Chrome version for Android phones. The latter renders code in the same proportional font as the rest of the text.

SO code blocks are formatted with <code> and/or <pre> HTML tags which Chrome/Android elects to display with a proportional font. These probably have some kind of custom CSS associated with them that sets the background colour and whatnot.

Should that piece of CSS be extended to enforce a monospaced font?

On the one hand, details of how things are displayed are ultimately decided by the browser. On the other hand, people format code for this site expecting it to be rendered in monospace, and a fairly major browser/platform breaks their expectations.

Update This only happens with the mobile version of the site.

The desktop version is rendered in monospace where needed (and with syntax highlighting): 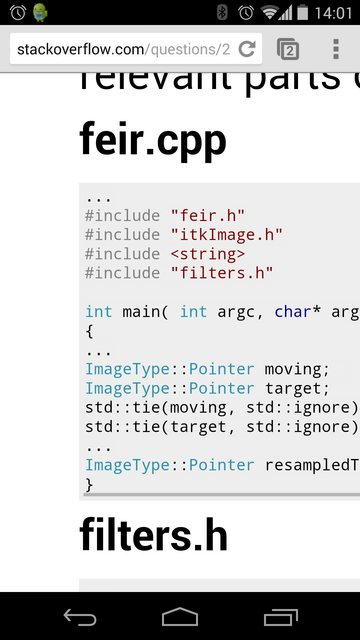 n.m. is right.. the Nexus 5 doesn't render the font as monospaced, I've added a screenshot from my Nexus 5 to provide an example: 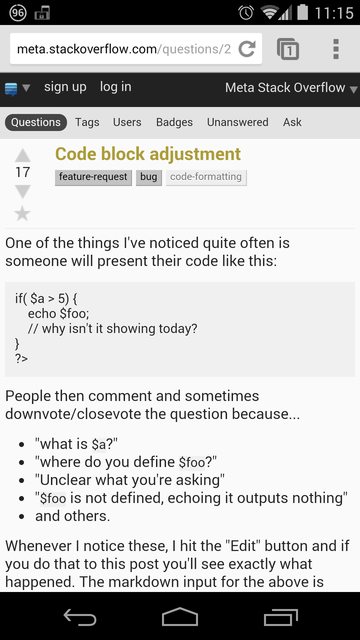 Not the answer you're looking for? Browse other questions tagged bug status-completed mobile-web .

27
80-column code samples scroll horizontally in Chrome on Ubuntu
50
Code snippets are not runnable on the Stack Overflow mobile website
8
Different code display on mobile Safari and desktop Chrome?
24
Question showing a tag, which doesn't show up in edit
6
Why does body text all appear bold on macOS in Safari?