Why are my "other" flags always declined?

If you see anything in the system that is evil, weird, or in any way exceptional and deserving of moderator attention for any reason… flag it! That’s the primary job of a moderator: to look at every flagged post, and take action if necessary.

So every time I see a situation that I can't (fully) deal with (i.e. requires more than a CV), I flag it for moderator attention (of course in addition to spraying downvotes and VLQ/NAAs :D).

I've complained before about specific cases. But generally, why are these all declined?

Oh, and if you think I'm not doing all I can, you're wrong. 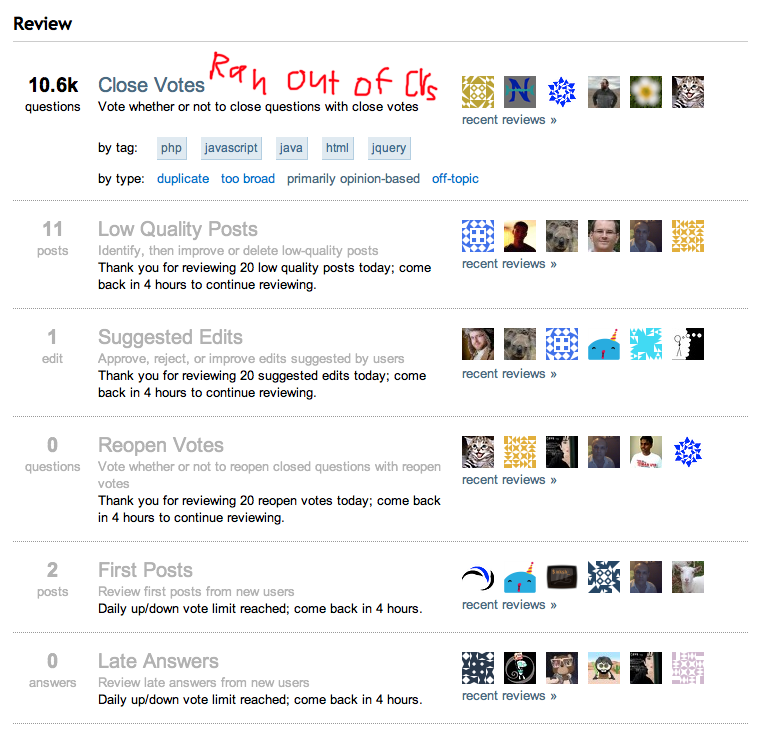 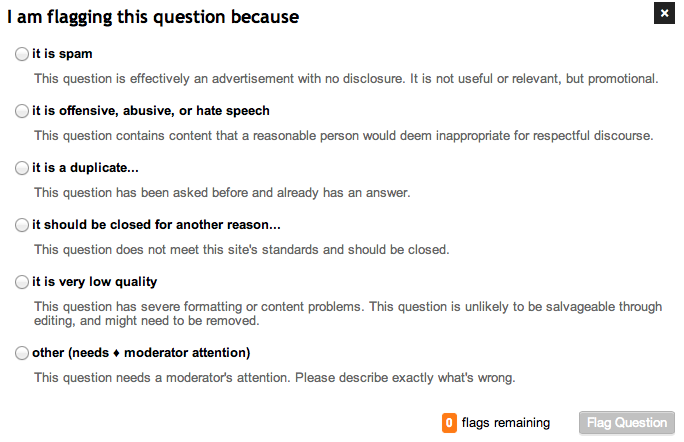 I can't speak for the moderators who declined them, but in my opinion neither of these are really particularly deserving of moderator attention. Solicited moderator attention is expensive there are a few moderators and community managers and they work really hard to go through a lot of flags.

Sadly, such bad questions are posted in Stack Overflow all the time. While we have the ability to flag questions as very low quality - that option is reserved for extreme cases. The rule of thumb is to only flag things the community can't deal with itself.

Moderators will simply decline flags they don't deem exceptional. That doesn't mean your help isn't appreciated, it's their way to guide you. I wouldn't take it the wrong way.

As for the particular questions:

I declined both of those flags. Neither of them were things that required immediate moderator intervention.

For this question, your exact flag was

The question was asked 12 hours ago, and has already been placed on hold. Part of the reason for the new "on hold" wording (which eventually changes to "closed" after a certain duration) is to indicate that we want people to have a chance to improve their question. They have no such chance if we delete such questions immediately.

We have been instructed to only delete questions less than two days old if they are completely off topic, spam, trolling, or otherwise unsalvageable. This was a programming question that received an answer that someone put effort into, so it didn't fit any categories for immediate deletion. There was no need for me to step in there, so I declined that flag in order to indicate as much and let you know that there's no need to flag these.

Your second flag came on this question, where your wording was:

No, I'm not going to suspend or ban a user who has given 528 answers, participated well on the site, and asked decent questions, all because you didn't like a question they asked. In fact, it looks like the reason they re-posted this question is because you downvoted their attempts at posting it, and you left comments that could be construed as hostile here and here. I know what you were going for with those comments, but there might have been better ways to word them.

At worst, this looked like a misunderstanding of how to improve an unclear question, which by no means is worth suspending someone over.

20
What can I use 100 flags for each day?
29
Why was this spam flag declined?
51
Why were these two NAA flags declined for link only answers (one of these being the accepted answer)?
18
Are we supposed to edit answers ourselves now, instead of flagging as NAA?
65
Appeal a declined flag