Correlation between reputation and response acceptance

It seems to me that most users with low reputation will accept answers in the comments with "That's it!" or "It worked, thanks!" but will not mark the answer as accepted -maybe because they are unaware on how the site works - while more seasoned users will mark when the answer is appropriate.

So, is there any statistical evidence or actual case studies that correlate the reputation a user has and the willingness to mark an answer as accepted?

There is significant correlation.

Questions asked by users with at most 100 rep have accepted answer in 40% of cases.

Following plot shows in detail how accept rate raises for low rep users. They are grouped in buckets of 5 rep points to avoid periodic noise (if your rep is 1 + 5k it's likely that you never accepted an answer). 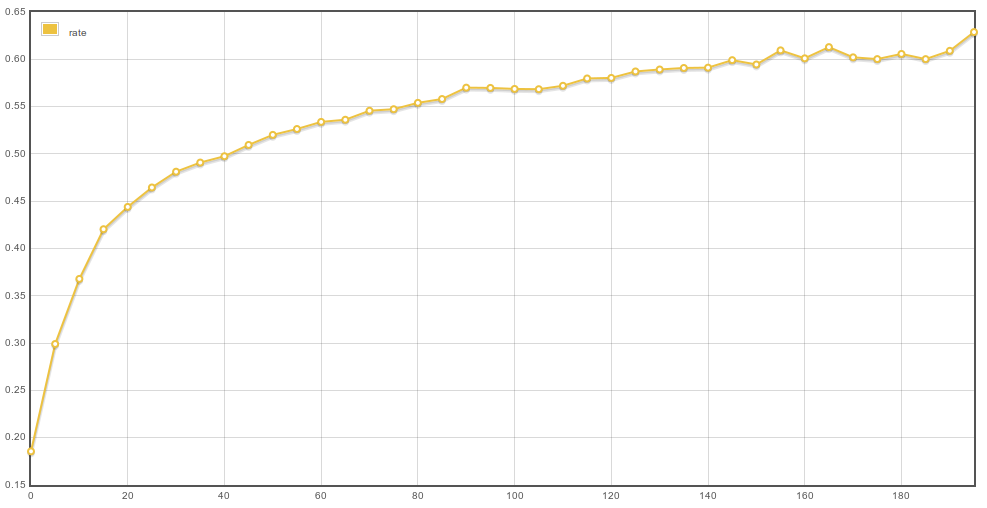 Before we build a Data query, let's find out whether we're asking the right question:

With all the questions open, this is a first graph which might help the discussion: Find unanswered questions by noob and reputation 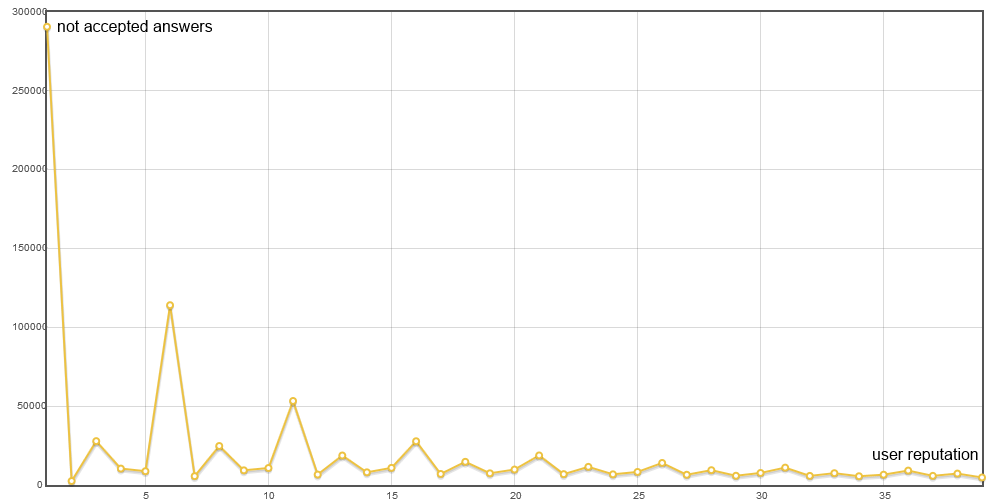 We can see the spikes at 1, 6 and 11 which are due to the 5 point reputation change per upvote. And we can see the number decreasing, which was expected.

Since I am new to OData, I make this a community wiki answer, so anyone can contribute here.

Generally, I see the advantage of "forcing function that requires they accept an answer on their first question before being allowed to ask a second." --msw.

I feels odd making a suggestion on this topic, having never posted a question myself...

For users who have earned a reputation under a specific threshold (say, 15; referencing Thomas W.' s graph). Find a way that might compel them to return to their question, after a time, and take some sort of action (loosely defined below).

If the hypothetical action is taken, the user would be free to ask another question immediately.

The 'hypothetical action(s)' include:

When the [NSAY] button is pushed; it would show a timer that counts down until the button needs to be pushed again. Perhaps the timer's expiration period would get progressively longer each time it is pressed. Again referencing the graphs posted by Thomas W. and zch, perhaps the timer would first expire after 5-10 minutes (while the user is hopefully still present active at SO). When pressed next, the timer might expire after 8 hours, then perhaps 24 hours.

After pressing the [NSAY] button, it would become non-operational (grayed-out) until it expires. (Of course, it would not affect the users ability to accept an answer any time).

This [NSAY] button would be non-operational (grayed-out) permanently when the user has accepted an answer.

What behavior is best for low-rep question users? If it is that they should return periodically and review the answers; then perhaps something like a [NSAY] button would train them to do that. As their reputation improves, this "conditioning" would be eliminated. (Although it does taste like The Button on the TV show 'Lost').

Not the answer you're looking for? Browse other questions tagged discussion accepted-answer new-users .

180
Why the backlash against poor questions?
121
Why can't I accept an answer in the first 15 minutes after asking the question?
12
NullPointerException Question on Stack Overflow
3
Answering entirely useless questions