Why can I only fetch vote counts once every second?

When I try to see some vote counts pretty fast I get this message: 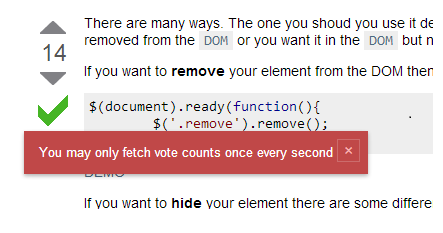 What is the logic behind this threshold?
Is it to protect the site from some unwanted user behaviour?

P.S. Unfortunately users under 1000 rep can't see what I am talking about

I doubt they weighed up whether 1.1 or 0.98 seconds would be a better threshold, you don't want a bot making 20,000 requests a second for vote counts so they put some reasonable limit on it.

The same applies to pretty much everything on the site. Asking, answering, searching, if it's not rate limited then there's probably a low cap of how many times you can do it per day anyway.

I've read before (Why is it a privilege to view vote counts?) that the vote breakdown is a relatively expensive query (hence they limit to 1k+ rep only), so it certainly makes sense to throttle it.

The reasoning behind rate limiting was blogged about by Jeff Atwood. The blog post can be found here - http://blog.codinghorror.com/rate-limiting-and-velocity-checking/

This blog post was also referenced by Jeff himself in an answer to this question: Why is there a 12 closure per day maximum?

Here is a small snippet from the post that pretty much sums it up:

...they [rate limiting and velocity checking] are your first and most important line of defense against a broad spectrum of possible attacks...

5
Is this a case of reputation bias?
2
Seeying up and down vote count on your own answer
3
Using 'see vote counts' changed the counts