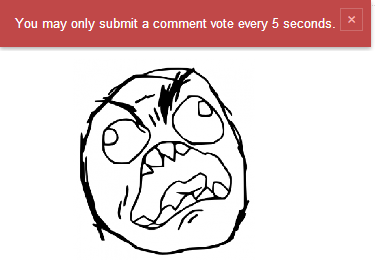 I often times will read through a string of comments, evaluating how I feel about them as a collection, and then go back through and sequentially up-vote the ones I decided I agree with.

The problem is, I can do this much faster than once per 5 seconds. It is exceedingly frustrating to have to sit and count to 5 before up-voting the next comment that I already read and evaluated.

The other thing to remember is that deleting a comment counts as a "vote".

Many comments in StackOverflow are quite technical. A comment-on-comment may change my opinion of the original comment by introducing points or references to materials I had not considered. I prefer to base my voting not just on my own prior knowledge, but also on what I learn from the combined wisdom of everyone who has already written on the question.

Often, at the end of reading the comments I identify two or more comments that are particularly useful, technically accurate, and well written. At that point I have finished with the set of comments except for possibly voting. I would really like to be able to just upvote those comments and then go on to the next thing. I know 5 seconds is not long, but in user interface terms it is long enough to be a noticeable distraction and annoyance.

As a specific suggestion, change it to no more than 12 upvotes per minute. That would be just as effective for throttling unconsidered or automatic voting. A user following my strategy will have spent over a minute reading and thinking about a set of comments. They will have 12 immediately available votes at that point.

The limitation has now been lifted, see Can we get x comment votes per y minutes, rather than one vote per 5 seconds?, where Jarrod responded with:

Yeah, this throttle doesn't make much sense any longer, so it will be removed in the next build.

You still have a combined 30 upvotes and deletes per day, though.

5
« You may only edit a comment every 5 seconds. » Why?
175
Meta hasn't changed at all
9
Lower the minimum delay for flagging comments
0
Five-seconds grace for editing not working sometimes

20
Why does stack overflow reset the 15 seconds comment timer when attempting to make a comment?
9
Lower the minimum delay for flagging comments
70
Vote count and badge scores not updating